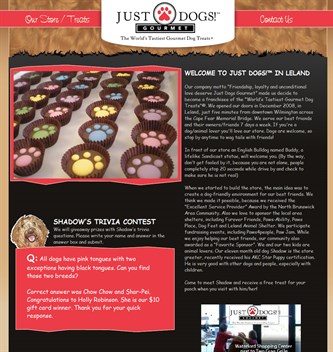 "If you chase two rabbits, you will lose them both." -Native American saying

From the first day I walked by Stephen's station and saw the incredibly yummy pic of the bon-bon chocolates on his screen (or at least that's what I THOUGHT I was looking at at the time..) I've been visually captivated by the progress on Stephen's workbench, of this site. I commented on how good looking the bon bon was in that screenshot with that nice cropping and bold pink, yellow and blue drizzles of icing

"Is that a bakery or candystore website we're doing?" I asked.

"Nah those are doggie treats" he said. He grinned at my stunned reaction.

Yup. Folks. Those. Are. Justdogsleland.com is a doggie person's solution to not having delectable enough delicacies to pamper your pooch with.