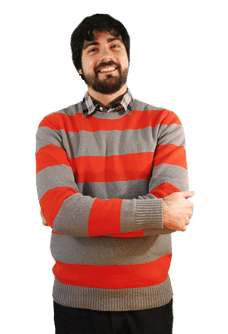 A long-time lover of movies, video games, and other extremely nerdy things, Klinton often spends his spare time practicing how to introduce himself as “Klinton with a K” in front of various mirrors.

Happily married to his high school crush, Klinton and his wife Sarah often dote upon their adorable animal children in the evenings by the fireplace. Among them is a Yorkshire Terrier named Winston and a 20lb cat named Stewart, which Klinton heroically rescued as a kitten from a sinister cardboard box in front of PetSmart. Okay, it wasn’t sinister. And it was a crate. A nice, clean crate. Okay, he adopted Stewart.

Oh, and they dote upon their actual child too.

With a BS in Physics from ECU, Klinton has worked a number of jobs during his education from pizza flinging to hardware installation. Wanting to return to his hometown after college, our available position for Web Developer caught his keen eye. Before he knew it he was fleeing south with his beard-trimmer in tow. Soon Klinton was voted onto the island with our team of developers and started building websites and modifying Nerf guns in no time.