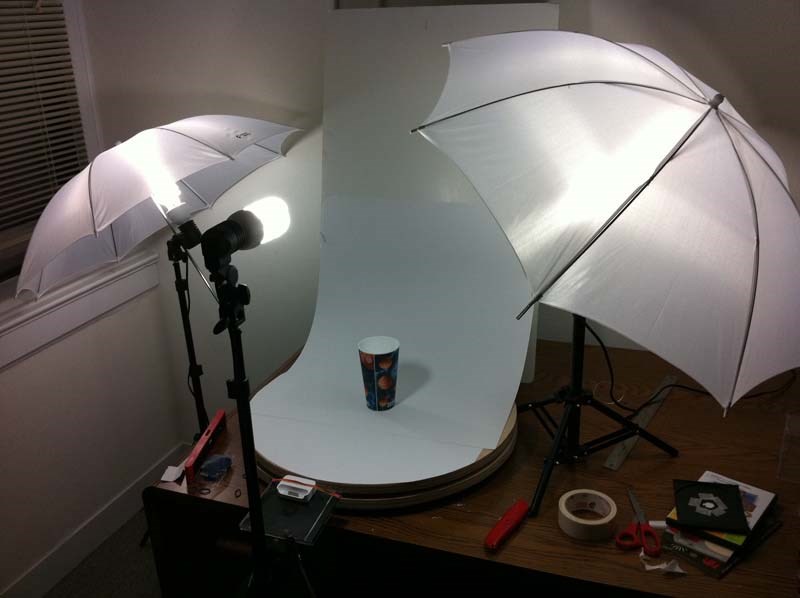 
In our last blog post we talked about making the interactive and awesome rotating lenticular images for Spirit Cups with no experience and a limited budget. Here’s how we did it! This guide discusses photographing lenticular images but the same technique can be applied to make any rotating image.

Our first thought was to place the cups on a record player, run it at a low speed, and take timed pictures of the action. Unfortunately, even at its lowest speed and with the use of a variable power supply to control the power/RPM of the turntable, it wobbled and moved too quickly for decent photographs to be taken. While on the right track, we needed something more stable and controllable to get proper results, so we decided to build our own personal cup spin-and-shoot studio.

Now, it’s not as sacrilegious as it sounds to use an iPhone for photography; iPhone cameras have notoriously good image quality when paired with good lighting. In fact, photographer Lee Morris wrote an excellent article on using his iPhone for a full-blown studio session. You can read it here on F Stoppers , and while you’re there check out his awesome results.

Drawing inspiration from Morris’ article and with limited knowledge of what we were actually doing, we attempted to set up our own (admittedly less glamorous) photo shoot.

So How Did We Do It?

First we took a jigsaw and cut the wood to be fitted to the Lazy Susan, attaching it all together with screws. This gave us a round, steady platform on which the cups could rotate. 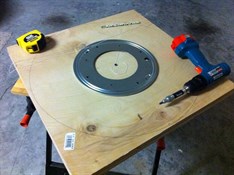 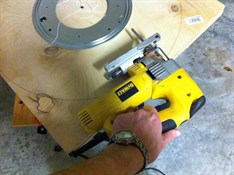 Next, we set up our light kit and created a solid white background with cardstock to ensure the clarity and clean edges we needed. With a little tweaking and the creation of a…unique iPhone stand (by way of charger mount and rubber band) we were ready to get started. 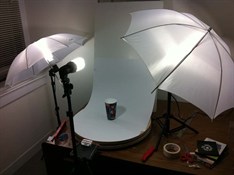 By using thirty or so measured and marked points around the Lazy Susan we were able to ensure thorough and complete coverage of each cup.

Next we loaded the images into Photoshop and cleaned them up to be completely uniform. Photoshop is capable of creating animated .gifs out of multiple files, but this wouldn’t provide us the effect we wanted. We wanted something interactive and lighter on bandwidth than a .gif allows, and the solution is surprisingly simple.

First, we exported the images into a spritesheet using a simple script . Then, using an awesome little jquery plug-in known as Spritespin , we were able to turn the sheet into an animated, interactive series of images which allowed the lenticular images to be seen as they would be in real life. There’s no flash required and no bulky .gifs, only a bit of tweaking to personalize everything to your exact specifications. The result of all this is attention-grabbing, interesting, and fun. Seriously, give it a shot, go play around with them.