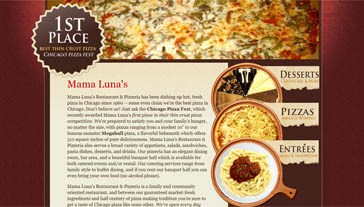 Mama Luna? Oh please. Did you think I was born yesterday?

Come on Manat, pre-Islam goddess of Arabian mythology, you're not fooling anyone. Really? "Mama Luna"? You were referred to as "moon-mother" in the ancient times for Pete's sake. If you're going into hiding, at least pick a clever name. You know, one that isn't essentially just your old popular monicker scrambled around. You must have joined up with the worst Goddess Protection Program ever.

These are some pretty sweet digs for a hideout though, Sacred al-Manat. Check out that banquet room! This thing looks like it can hold at least three score people...what's that? Four score? ....and seven years ago? Oh shut up, I thought it was a good joke. Manat, you've got to lighten up a little bit now that you've been relocated. Being a Goddess of death and destruction for a thousand years must really kill your sense of humor.

At least you're equally serious about your pizza...this crust is delicious. It's so thin and crispy. What's that? You make it out of unleavened bread left at your black stone shrine in Quidaid, near Mecca? That's what that secret deliciousness must be -- holiness! No wonder Mama Luna's Pizzeria and Restaurant won the Best Thin Crust Pizza award at the Chicago Pizza Fest. Seriously, yum. If you weren't such a creepy old lady with a moon constantly following you around I would hug you...this pizza is that good. Maybe you should stay out of the deity game for a while and keep making such delicious food. It's never too late for a second career.