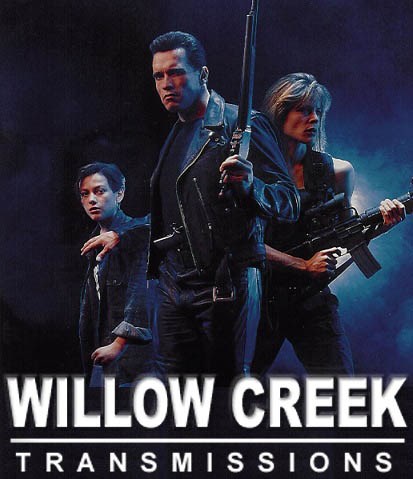 I mean, seriously, That's an open-and-shut case right there, so please don't waste any more of my time debating this. The Terminator, better than T2: Judgment Day? Are you insane? Don't get me wrong, both movies are fantastic - and while there's plenty of explosions and chasing and Ahhhnold-isms to be had in both The Terminator and T2, you'd have to be absolutely bonkers to not understand the beauty of T2. There's a pure cinematic thrall in watching Schwarzenegger on a motorcycle getting chased in a trench by an unstoppable liquid-metal death machine with a shotgun driving an 18-wheeler, and that "nuclear holocaust" dream of Sarah Connor's still gives me nightmares. Was that too long-winded for you? Let me summarize: liquid-metal death machine, shotgun, motorcycle, nuclear holocaust. Case closed.

The only argument I've heard to the contrary which carries any weight at all is that there couldn't be a T2 without a T1. Fair enough, I suppose, but that's like saying we should've stopped when we first invented the wheel...humbug to these newfangled rubber tires, perfectly circular shapes, and so on. Heck, Star Wars started at Episode IV and only got infinitely worse when they went back to square 1. Maybe all action/adventure movies should just pre-empt themselves by starting with a sequel.

Rebuilt transmissions work much in the same way - a good used transmission (good movie) is disassembled, repaired, and rebuilt with parts that are better than the original pieces (updated with more chase scenes and explosions). Each vehicle's transmission is unique, but there are various design flaws (the romantic plot of the first Terminator) which, over time, contribute to the majority of transmission problems and failures (not winning any Oscars, wasting time that could be better-spent on blowing things up). By observing and understanding these weak points, the certified technicians (James Cameron) at Willow Creek Transmissions can easily make a transmission better than new by first fixing its problems (removing any romantic, slow-moving crap), then upgrading any weak spots in the transmission with newer parts (the T-1000, bigger explosions, Sarah Connor becoming a ripped judo master) that have been better-made to withstand the wear and tear of a transmission system. This is quite similar to the way in which the T-1000 of Terminator 2 was built, and the end result is a stronger, better, more efficient machine. The only difference is Arnold Schwarzenegger isn't around to beat, shoot, assault, mangle, and explode the crap out of your new transmission...and I think we can all agree that's a good thing.

The new Willow Creek Transmissions website features an online store, a simple contact form for getting accurate cost estimates and information, and an in-depth and interactive FAQ that can help put your mind to rest. Check it out!