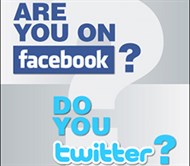 Yesterday morning Twitter and Facebook were subject to a DOS (denial-of-service) attack. A DOS attack is where hackers attack computers and flood the targeted web site with communication requests, resulting in the need to shut down and restart. "No user data was at risk and we have restored full access to the site for most users," spokeswoman Brandee Barker told the AFP news agency. While Facebook was only degraded slightly, Twitter had outages including one that lasted more than two hours. There were also other attacks on social media sites such as LiveJournal and YouTube. While no one knows for sure who is responsible for these attacks, both sites have previously been targeted by hackers.